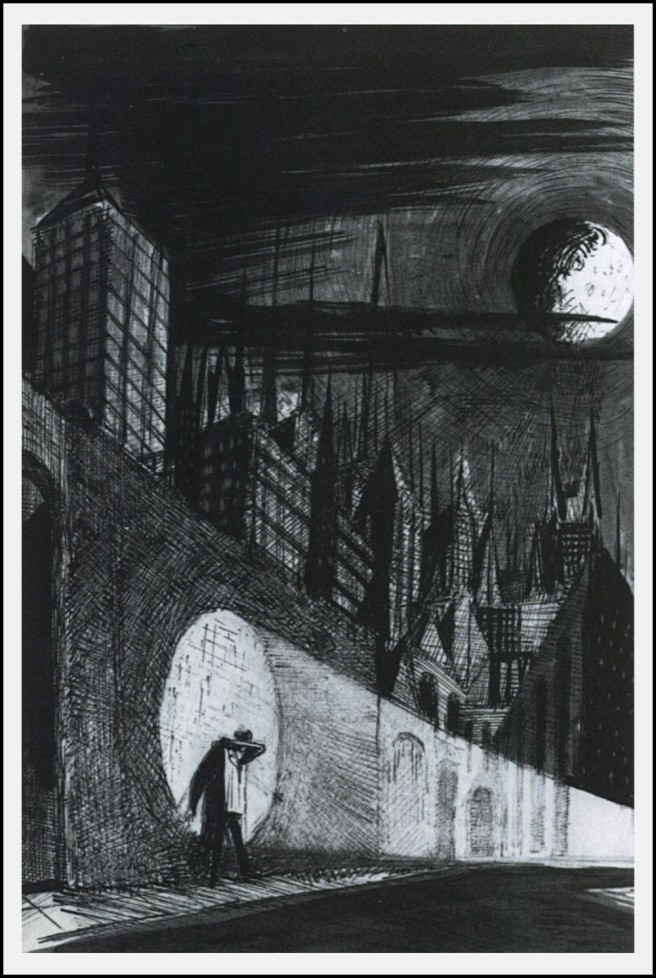 The Pedestrian is a science fiction horror story by Ray Bradbury, written in 1951. It explores a dystopian future set in 2053; a totalitarian society where books are illegal, pedestrians arrested, and people are instead overly-preoccupied watching television.

In this story, the protagonist, Mr Leonard Mead is out on a walk in this ‘empty’ world. The atmosphere is a surreal quiet. Nobody is around that night (or ever, Mead implies, as he explains that ‘in ten years of walking by night or day, for thousands of miles, he had never met another person walking, not once in all that time)’. He is stopped and questioned by police, and then arrested and taken away as the story concludes.

This short story explores an idea that Bradbury was to unravel in the form of an entire novel Fahrenheit 451 two years later; its opening scene also conveying the protagonist (this time named Montag) walking beneath a moonlit night.

Bradbury’s narrative is, as usual, inspiringly poetic and rich with imagery. The city paralleled with a graveyard, its houses described as ‘tombstones’; symbolic perhaps of homes without ‘life’, without the deliberate proactive thought and play he often implies in his part-biography part-writing-guide: Zen in the Art of Writing, and the despondency Bradbury felt towards the rise and immense popularity of television in his lifetime.

The story reflects a surrealist feel in its setting of ‘mist’, and ‘silence,’ the moonlit night, and the strangeness of it all as described in Bradbury’s lyrical-rhythmic language:

To enter out into that silence that was the city at eight o’clock of a misty evening in November, to put your feet upon that buckling concrete walk, to step over grassy seams and make your way, hands in pockets, through the silences, that was what Mr. Leonard Mead most dearly loved to do.

Mathew Beaumont in Stumbling in the dark: Ray Bradbury’s Pedestrian and Politics of the Night (2015), notes that the name choice of Mead for Bradbury’s pedestrian might have served also as an effective reinforcement of the pastoral associations the word mead implies.

Bradbury’s story portrays a sceptic attitude towards the digital, and reflects the isolating impact of technology in terms of a world increasingly run by machines and people being less able to express themselves creatively; to the extent that art and literature are considered illegal and burnt. Beaumont notes Bradbury was evidently troubled by the rise of television in the late 1940s, expressing in his stories, concerns about its ability to capture attention, replace real experiences, and create submissive ‘programmed’ individuals (Beaumont 2015).

Beaumont, M (2015) Stumbling in the dark: Ray Bradbury’s Pedestrian and the politics of the night. Critical Quarterly. Available at: http://onlinelibrary.wiley.com.ezproxy.lib.swin.edu.au/doi/10.1111/criq.12232/full